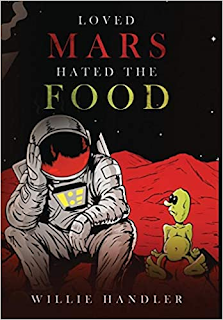 Dix Jenner, a self-proclaimed slacker, is the first chef to live—and maybe die—on Mars. After an explosion kills his colony companions and leaves him with nothing but his spacesuit, his time on the faraway planet is about to expire… until he’s rescued by friendly Martians Bleeker and Seepa, who smuggle him into their vast underground civilization. Now an alien among Martians, Dix must hide his identity to survive. Despite an unfamiliar world of telepathy, strange class dynamics, and really bad food, Dix sets out to make his mark—if only out of boredom. But after opening a cafe—who knew Martians loved espresso?—he starts to notice that responsibility can feel good. Not only that, but he’s got a new romance, and for the first time he actually cares.

Unfortunately, his success attracts the attention of the corrupt and narcissistic Martian Grand Leader who is skeptical of his flimsy fake identity and becomes determined to uncover the truth. Forced to run to avoid being imprisoned, Dix gets lucky: an unexpected NASA rescue mission has landed on Mars. But seeing it brings back the dark secret he’s been keeping from himself about the colony’s explosion and now Dix must choose between returning to Earth or spending the rest of his life in a cell playing euchre on the dusty red planet where he belongs.

Rick Tompkins, a suburban Toronto insurance broker, never considered a career in politics until a good friend, who happens to be the leader of the Conservative party, asks him to run for office. He accepts the offer, with the understanding that he would probably not win, but can use the opportunity to gain some visibility for himself and his business. Jerry Switzer, a veteran party worker, is sent in to guide Rick through a campaign in a riding that hasn’t elected a Conservative in years. Rick fumbles his way through the election campaign and manages a surprise win but at the expense of saddling his party with an impossible commitment. What makes matters worse, Rick is anything but politically correct. He offends everyone in his path and stumbles from one political scandal to another. Still, Rick has one saving asset: a political party machine that is able to spin scandals to its advantage. 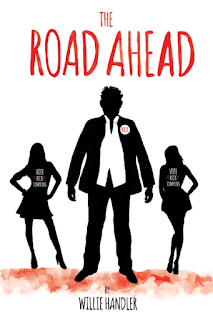 WEBSITE-https://williehandler.com
ABOUT AUTHOR
Hello, I’m Willie Handler.
Thanks for dropping by my blog. I’m not using a pseudonym (yes, people have asked it it’s a real name). I live in a classic bedroom community with streets and streets of identical homes just outside of Toronto, Canada. Just picture the fictional town of Agrestic, California from the TV show Weeds.
I’ve reinvented myself on several occasions through my work career. I’ve been a hospital administrator, a government policy wonk, an insurance expert and consultant.
Now, I’ve decided I want to write humour.
Why humour? Humour is in my DNA. It’s part of who I am. When I was young, I actually wanted to be a comedy writer. But not being a risk taker, I went to grad school instead. I’m not one of those people who was an author at 11 and has always wanted to be a writer. I was reading at 4 but never thought about writing until recently.
My first novel, THE ROAD AHEAD, was partly about my previous career. I spent 30 years in government and had this story I wanted to tell. The novel I am currently working on LOVED MARS, HATED THE FOOD is humour/sci-fi story. As for science fiction, I had a strong interest at a young age. I used to read authors like Robert Heinlein and Ray Bradbury. Then I got away from reading fiction while I was working. I’ve sort of come back to it now.
I get asked about my writing process a lot.
I am a totally undisciplined writer. I can be writing away furiously one day followed by a day of organizing my paper clips by size and color. I don’t do story plans or outlines. I’m strictly an organic writer. I only really know what will be in the chapter I’m currently working on. The rest of the plot is either fuzzy or undecided. I’m referred to as a pantser.
Why did I decide to go the independent publishing route?
I went indie with my first novel because I couldn’t find an agent interested in it. I know what writer hasn’t had that experience? Because the book was a satire of Canadian politics, I was limited to contacting Canadian literary agents, an extremely small group. None had any interest in the genre, me the story. Who knows? You never get read feedback.
What’s my plan to get my next novel published?
Plan A is to contact every literary agent in the English speaking world. If that doesn’t work? Plan B is to pull a Rupert Pupkin (King of Comedy, 1982) by kidnapping a publishing executive and holding him or her ransom until my book is published. I probably should come up with a Plan C.

I was told the following story one dark plutonium night Whilst  I was doing my bit for the economy during this current pandemic and having ...